In today’s seminar we’re going to be discussing RB Leipzig’s Dayot Upamecano, who is considered one of the best central defensive prospects in Europe! The full analysis video from which these images are taken is available to Patrons here: https://vimeo.com/408793181/7fbb938e2a.

Dayot Upamecano’s biggest asset as a footballer is his ability to drive with the ball and beat a high press, something which is increasingly important in the modern game. Upamecano is a freakishly good dribbler for a centre back and his ability with the ball at his feet is big contributing factor to why RB Leipzig are so difficult to play against. In the below images we have an example of a side (Borussia Dortmund in this case) looking to press high, but the young Frenchman comfortably evades the pressure and opens up multiple options with the ball. This really is a key aspect of his game: the ability to not only keep the ball in pressured situations but to also progress play intelligently. 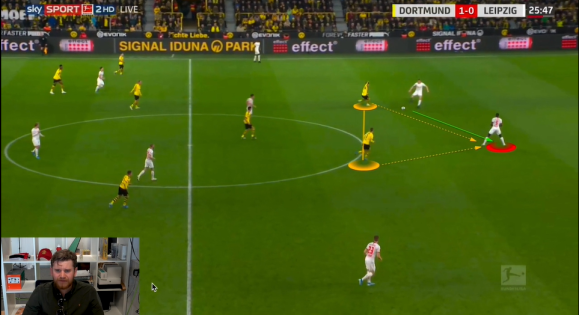 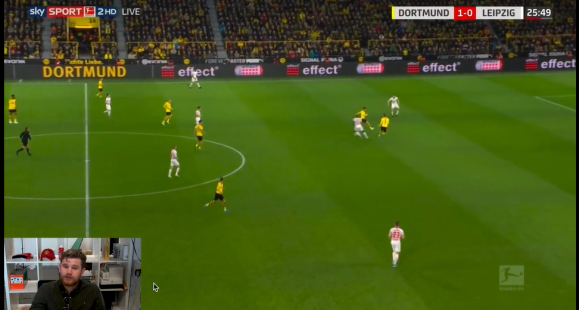 Impressively, Upamecano is also a big asset in terms of RB Leipzig’s build up play and their ability to penetrate defensively lines. Not only can he drive from deep, but he can also really pick a pass once he gets into the opposition’s half. Below we can see two examples of the reported Man Utd and Arsenal target on the ball in a situation wherein RB Leipzig are looking to create and doing well to spot and execute line-breaking passes.

The ability that the 21 year-old has to play those kind of lofted, long-range passes from deep is a real weapon for RB Leipzig. Their forwards constantly make smart runs because they know that – even if the ball is at the feet of their CB rather than a midfielder – there’s a high chance that they will be picked out and have an opportunity to score! Upamecano is constantly scanning when he has the ball in these kinds of situations and is a real play-making threat from deep!

One of the other things that makes him so sought-after is his ability to play smart, forward passes on the carry. He can drive from deep, he can create opportunities with his passing from deep, but he can also drive in advances areas and really disrupt the opposition’s shape before playing forward. We can see an example of this below in a situation which ultimately leads to RB Leipzig winning a penalty.

He is nominally a centre back, but it’s clear to see just how influential Dayot Upamecano is for RB Leipzig in all thirds. Ultimately, what makes him quite so impressive is that he sees a picture that 99% of CBs simply don’t in terms of his ability with the ball. Below we can see an example of the young Frenchman having a plethora of easy passing options but opting to play a really difficult ball which ultimately leads to a a chance. Green indicates the passing options that most players would use in this situation and red highlights the recipient of the pass.

Now, let’s talk a little bit about the defensive side of his game – which is often something that gets overlooked. In the below clip we can see a situation from the Spurs game in the Champions League in which Upamecano does really well to cut out a cross and stop RB Leipzig having a real problem with the two runners. This was a game in which the Frenchman really caught the eye on the big stage with his progressive carrying and pretty direct threat to goal, but it’s worth noting that he was also very impressive in his defensive efficiency

We can see another situation below in which RB Leipzig are in a really dangerous situation, essentially a 4v3, but manage to get out of it because of Upamecano’s excellent defensive ability. The Frenchman’s incredible defensive talent really allows his side to play a very high-risk brand of football and get away with it.

One of his best defensive performances came in the 0-0 draw against Bayern Munich – in which he was the best player on the pitch for me. There was a huge double block to deny Bayern Munich taking the lead in the second half, which was really impressive, but what I want to highlight here is the intelligence that leads to him being in the right place to do that. Whilst he is physically dominant, it’s important that we don’t think of Upamecano as somebody who relies on that physicality and ability to win duels, because he’s a super-intelligent defender. We can see below how we scans his surrounding, asseses the danger and gets himself in the position to make that key block – avoiding the temptation to get tight to Robert Lewandowski. This is really impressive decision-making off the ball from the young man. 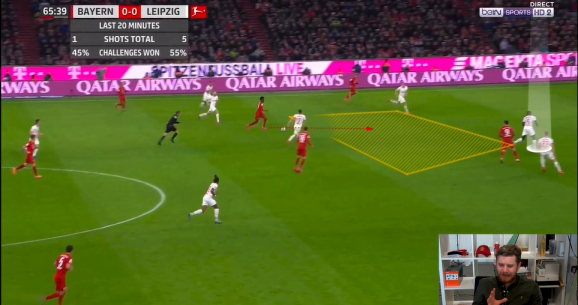 Below we have another example of really smart decision-making from the CB. It comes from a goal kick situation: Upamecano is watching Goretzka originally but spots Thomas Muller’s run and comes across to deal with that as the key threat. The referee questionably gives Bayern Munich, but the immediate danger is killed regardless because of the youngster’s ability to recognise and deal with danger. 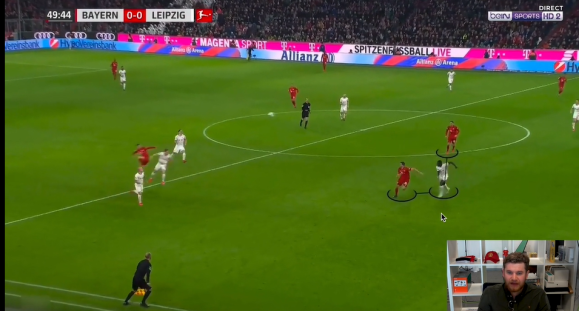 The way that he defended against Robert Lewandowski – who has probably been the best number nine in the world this season – was massively impressive in this game. We can see below an example of him identifying the danger, cutting the passing lanes and stopping Bayern Munich creating chances. That’s one of the really exciting things about him as a defender: he has great defensive instincts and he’s really efficient when acting upon them.

Upamecano was constantly aware of Robert Lewandowski in the game, whether he looked to drop off the line and playmake or run in-behind, Upa’ was there to stop him – as you can see below. 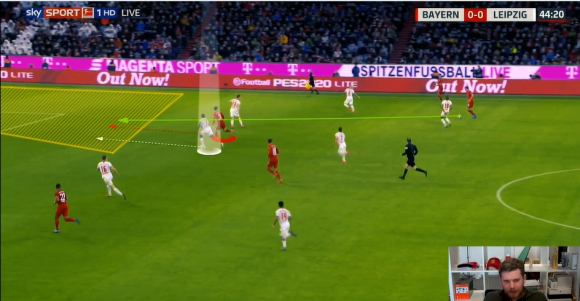 Ultimately, Dayot Upamecano is one of the best and most complete centre back prospects in the world. A multi-facilitated ball-player who can influence play massively in all thirds. He isn’t perfect (he can often be beaten by runners on his outside) but he’s pretty much as close to it as you’re likely to find in terms of pre-peak age central defenders. He’s definitely somebody I’d like Man Utd to sign!

If you’re looking for more analysis on Upamecano, check out our latest Patreon seminar or YouTube video!